Hello world of Club3D, my name is Nicole and I recently purchased the
Club3D Multi Streaming Hub (CSV-5300H) from Amazon.com.

I have scoured the forums and all over the internet for 2 days now, and I have decided to ask the question directly myself on the official forums.

It seems to work perfectly fine with my normal displays, e.g. 3x S242HL 60Hz 24″ LCD Panels, and in mixed configurations with my flat-panel 60″ TV directly next to the desktop computer itself.

You can see the configuration here in the AMD Catalyst Control Center:

This is a two-part problem.  I run the monitors at 60Hz each, but the AMD Displayport Diagnostic utility of the Catalyst Control Center shows that the S242HL Monitors are eating up the bandwidth equivalent to 1920×1080 (75Hz) when they most certainly are not using 75Hz.  Normally this would not be a problem, but I am running display emulation adapters called HeadlessGhosts, originally a project started and successfully funded on Kickstarter.com, that virtualize a monitor of almost any frequency/refresh rate and resolution from 640×480 @ 25Hz all the way up to 4k @ 240Hz.  Seen here: https://www.kickstarter.com/projects/devjoshi/headless-ghost/description 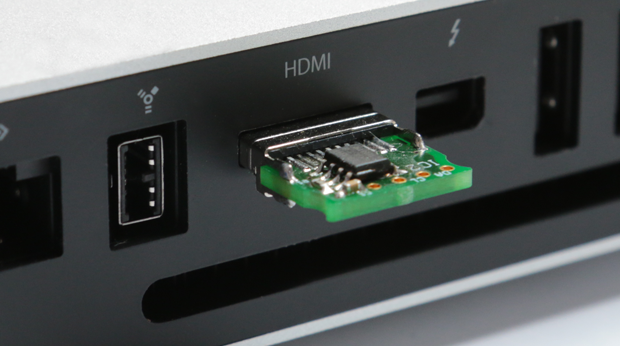 While the adapters were originally designed for headless servers and server farms, the developer of them modified their EDID settings with more resolutions and refresh-rates specifically for the Oculus Rift.  The point of the several HeadlessGhost adapters (in my scenario) is to virtualize monitors within a 3-Dimensional space inside of the Oculus Rift Head-Mounted Virtual Reality Display.  Seen here: https://www.oculus.com/dk2/

I use custom-developed software called Virtual Desktop (Seen here: http://vrdesktop.net/) to use the HeadlessGhosts as workable virtual environments within the virtual reality headset, and this works fine for the real-life S242HL 24″ LCD panels, and when the HeadlessGhost adapters are plugged directly into the available GPU ports. As you can see, each S242HL panel uses about 5.6Gbps per panel (Even though none of them are running at 75Hz, just 60Hz), well within bandwidth limitations of the DisplayPort 1.2 standard being used on the MST Hub.

As I previously illustrated, the S242HL panels are eating up a quoted 5.6Gbps per lane of the MST Hub, being quoted at 75Hz per panel, EVEN THOUGH they don’t actually operate at 75Hz unless the resolution is lowered to an insanely low resolution.  This problem is exponentially larger when you plug a HeadlessGhost into one of the 3 lanes of the MST Hub.  Immediately the Displayport Diagnostics window will report that the HeadlessGhost is eating up about 17.0 Gbps of the MST Hub’s available DisplayPort bandwidth.  And even though the HeadlessGhost is being instructed to operate at 1920×1080 @ 60Hz @ What SHOULD be 5.6Gbps per headless ghost, instead the diagnostic window reports that the headless ghost is running at 4k Resolution @ 240Hz, which is WAY over what it is supposed to be operating at, and as a direct result of this, I am unable to add any additional HeadlessGhosts to the MST Hub, because there is “Insufficient Bandwidth” to add any more displays to the Hub.

Can you tell me why it is doing this?  I have tried to modify registry-based EDID values using Custom Resolution Utlity on each of the HeadlessGhost display adapters to only showing 1920×1080 @ 75Hz, and it does not affect the DisplayPort Bandwidth what-so-ever, and I am too afraid to actually flash the EDID chips of the adapters using things like “PowerStrip”, which may permanently damage the adapters themselves.

So are there software workarounds, is there a foundational science behind why it uses the maximum potential of the adapters and S242HL displays to account for available bandwidth?  Any why does it eat the bandwidth of 75Hz even though none of the displays are running at 75Hz?  (The HeadlessGhosts are designed to operate between 25Hz and 240Hz)

Dear Branpute, thank you for your question. It’s a very interesting setup you are running and a very specific issue you encounter. We will check with the technical team if this is a known issue and if there are any workarounds available. Will update you as soon as possible.

Hi Branpute, the following link leads to AMD’s EDID utility which lets you read and save the EDID info. Can you read and send us the info? Then we will check with AMD if there is a solution available to this issue. Thanks!

Hi Branpute, the following link leads to AMD’s EDID utility which lets you read and save the EDID info. Can you read and send us the info? Then we will check with AMD if there is a solution available to this issue. Thanks!

I have enclosed the EDID binaries and tiled textfile information for one of the S242HL LCD 24″ Monitors, as well as one of the HeadlessGhosts.

You can find the aforementioned files here:

Hi Branpute, after checking with our technical team here and Taiwan we unfortunately have no idea what may cause this issue and what to do to solve it. Have you been in contact with the manufacturer of the Headless Ghost to report the issue?

I have contacted the manufacturer directly, and i’m currently awaiting a response.  I hope for a quick answer and hopefully a solution! 🙂

Good morning Nicole – thanks for your email.  Looks like a tricky problem you have here.  In the first instance – the headless ghost only has limited support display port as discussed here: https://www.kickstarter.com/projects/devjoshi/headless-ghost/posts/1035927 And while you aren’t directly using display port, there is a chance that it causing some issues.  According to the Spec sheet the EDID versions supported by the hub are compatible with the headless ghost which means that the display modes should be being picked up properly.  As you surmised in your post – even though you select a lower resolution the hardware is operating as if there is a 4k @240hz display attached. For now I can’t say why.  If you like I can provide the EDID file and the club3d guys can take a look at it. I fear that this won’t solve your issue in the short term however.  Alternatively, I could provide you with a different EDID file which doesn’t go all the way up to 4K. Let me know what he specs are that you need and I’ll tweak it for your needs and then you can flash it onto the module using power strip. If you aren’t comfortable doing that I’d be happy to do it for you if you shipped it back to me.  I’ll take another look into what might be preventing you from selecting the resolution you need with the current firmware but without a media hub to test with I may not figure it out.  Let me know what you’d like to do next,Warmest regards from London,Dev
—
[email protected]_ghost
From Official HeadlessGhost Hardware Developer Response

So what we are going to do, is attempt to flash new EDIDs provided by Dev Joshi in London, and that should theoretically fix the bandwidth issues since the MST Hub will no longer be eating up [email protected] bandwidth (even though I am actually telling the adapter to run at 1920×[email protected], (and for all intents, it works as it should, but keeps eating up DP bandwidth of 4k anyway).

I hope flashing the EDID too many times doesn’t damage the HeadlessGhost adapters, but if this fixes the issue, I will be very happy.  I am also asking Dev Joshi if he can share how he generates the EDID files themselves, that way I can dynamically test different resolutions and refresh rates on the MST Hub.