I bought the CSV-6400 with hopes of it driving six monitors off of my AMD Radeon XFX R9 290X.
I’m following guidance from:
https://multimonitorcomputer.com/best-6-monitor-gaming-video-cards.php

Currently I have the first two monitors connected to the DVI ports on the card.

The MST hub is plugged into the DisplayPort on the card, and the remaining four monitors connected to the MST hub using 4 of each of these:

which are each plugged into:

Is there a driver I need to install to get the MSI hub to work? Should it appear in device manager? Can all four of the adapters between the MSI hub and the monitor cables be passive, or do at least some of them need to be active adapters? How do I query the MSI hub to see its firmware version?

Since I do see the four monitors that are connected to the MSI hub work for a couple of seconds when Windows is booting up (they display the Windows splash screen before going black). I’m thinking this must be a software issue. What steps can I do to troubleshoot? I’m running Windows 10 version 1803, and Radeon driver 18.12.1.

We don’t think you are very “far off”.

We know R9 290X can feed 6 screens, and that the AMD Driver Software is decent for use with 6 screen both in extended as in Single Large Surface Mode. We know the CSV-6400 works, and we knwo the screens work. That leaves the Cable / Adapters.

An MST Hub is an active device (with DP++ outputs) meaning you should use passive DP to DVI Adapters. And we strongly advise against using DP to HDMI and then HDMI to DVI Adapters.

Connect the screens via MST Hub 1 by 1 and forst set resolution to 1920×1080 before connecting the next.

In the AMD Driver in advanced settign you can make a “preset setting”. When you are done setting up teh 6 screens, we would advise you to make such a prese setting and save that. Whenever you PC loosses your preferred settign for whatever reason, you can just go back to it by loading your preset.

I couldn’t find any Club-3d DP to DVI adapters locally, so bought a 2 pack (of 2 each, so 4 total) these from Amazon this morning with same-day delivery:
https://www.amazon.com/gp/product/B00K2E4RGC

They arrived this evening.  I powered off my PC and installed them between the monitors and the MST hub, powered up, and got the same results as before.

I then re-read your post, where you said to plug in the monitors one at a time.  So I unplugged them all from the MST hub, then plugged them in one at a time and sure enough, Windows detected each of them, one by one, with the same sound as the USB connect sound.  At last, success, or so I had hoped.

I was able to get three of the monitors detected, but the fourth one would not detect on the MST hub.  I realized there was an unused HDMI connection on the back of the video card, so I plugged the sixth monitor into that and it finally came up.

My question now is why when I plug in a seventh monitor (the fourth Displayport on the MST hub) will it not detect?  If I unplug the monitor from the third Displayport and then plug in the fourth monitor into the fourth Displayport it will detect, so I know the issue is not with the monitor or the cable.  It seems that the my four port MST hub maxes out at driving only three monitors at a time?  Is this a limitation of the video card, or the driver?  Why sell a four port Displayport splitter if it can only drive three monitors?  If this is a limitation of my video card, is there any where to read about the maximum number of monitors it can handle through the Displayport?  Are there video cards that can drive all four Displayport connections?

Why couldn’t I drive six monitors using two from the DVI ports directly on the card and the four Displayport outputs on the MST hub?  Is it required to use the HDMI port on the video card to get all six monitors working?  Thanks again for your help.

You card supports 6 screens in total, so it will not recognize the 7th screen, no matter how you connect that via MST Hub or Directly to the graphics card. The only work around this is to place an extra graphics card, or use an external USB Graphics adapter.

What Screens do you have?

I’ve had a few months to use the six monitor set up now and finally figured out why I was only able to use three of the four Displayport outputs on the MST hub.  For the past couple of months the 6 monitor setup was not very stable with the video occasionally turning black on all six monitors (video driver crashing and restarting) multiple times a day, until about two weeks ago when I decided to plug in a USB multi-meter to measure the current being drawn by the MST hub.  I found that the current was way to low even with a 2.1 amp USB power adapter plugged in.  I decided to try a higher amperage USB cable between my USB power adapter and the MST hub, and the current immediately jumped up to over 1 amp.  This made my setup stable, but the one monitor connected to the HDMI port on the video card still would not go to sleep at night.

I finally found out that that HDMI cable can’t carry the sleep signal.  Last night I was thinking about this monitor sleep issue, so decided to try replacing the HDMI cable (that was plugged into the video card) back with the original intended use of the forth port on the MST hub, and it started working for the first time.  I guess the USB power cable was the issue all along.  The MST hub is now drawing 1.31 amps, which is exactly what I would expect.

If anyone is interested, I found this tool to be very valuable in troubleshooting issues with my MST hub.  It is a USB multi-meter that shows the USB adapter’s voltage, and how much current (amps) is being drawn from it.  I just plugged it into my USB power adapter, then plugged my USB extension cable into it, so it just sits in-line with my MST hub’s power.  I leave it plugged in 24×7. 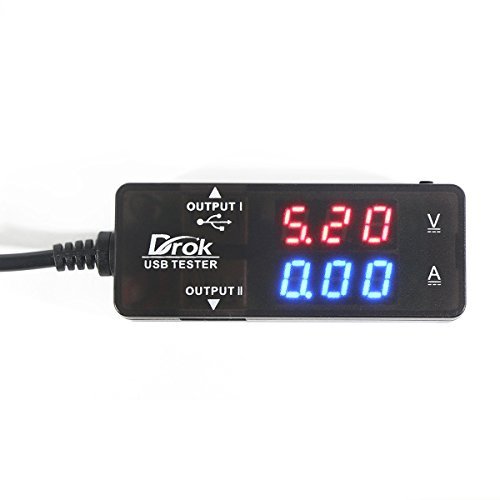 Thanks again for all your tips!