Is my GPU busted? Computer won’t power on when GPU plugged in 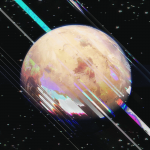 Recently I got the HTC Vive, and after a short time of fiddling around with it, my computer crashed. The fans were still spinning, but the display was blank. No blue screen or anything. I turned it back on and played a little more, when suddenly, the computer completely powered down, fans and all, and it wouldn’t turn back on again. If I switched it off, unplugged it, pressed the power button, plugged it back in, switched it on, and then tried turning it on, the fans would twitch slightly before stopping.

After a lot of troubleshooting, which I’ll spare the details of, eventually I figured out that it would start up fine so long as the GPU’s (R9 290 Royalking) power isn’t plugged in. When the 6 pin and 8 pin ports are unplugged, the computer starts up fine, even the GPU’s fans spin up, but when they’re plugged in, it acts as previously described, not powering on, with only a slight fan movement. It’s less than a year old, I bought it specifically for VR, and I’ve already had to RMA it once because of some major display issues on arrival, so my suspicion is that it’s faulty, but who knows.

Unfortunately, the place I ordered it from (NCIX) only has a 1 month standard warranty for video cards, so now they won’t replace it. So I really need to fix this card. Since its fans still spin up when the power isn’t plugged in, it can’t be completely dead, right? Is there anything I can try to get it working? Is there anything I should have done to prevent this? (Although I’m honestly dubious that this could have been the result of an error on my part, given such a short lifespan, while only ever barely OCing it, and even then, only by using the provided software).

If I can’t fix this, I’m $350 in the hole, so any advice would be greatly appreciated. My specs are as follows:

Hi Chachamara, thank you for joining our forum. It’s unfortunate to hear you’re experiencing issues with your R9 290 royalKing card, especially if it has been swapped already by the reseller. Judging from the symptoms with your card it’s probably defective.

If it’s not working at all, please contact our RMA department via [email protected] so our colleagues can assist you further.

Thank you very much for your reply! At your suggestion, I put my old GPU (an EVGA GTX 570 HD) into my system, and I was able to power it on with no issues, the display working fine. I borrowed my brother’s system, verified it was operational, and then swapped out his GPU (can’t remember what it was…) with the problem 290. It exhibited exactly the same behaviour as it did in my system, refusing to power on when the 6 and 8 pin ports are plugged in, but powering on just fine (albeit with no display) when they aren’t, the 290’s fans even spinning in this instance.

I will send off an email to the RMA department. Thank you once again!