Hi,
I am now on my second cac-1010-a hdcp off display adapter, because the first had shimmering lines of green appearing on black or near black backgrounds. My problem is that, now this new adapter shows the exact same green lines and noise, on all dark backgrounds as seen on these images.
The wallpaper is 100% black, but this error also appears on dark grey, and dark blue, but it is harder to get on a picture.

Am I doing something wrong, or is there something wrong with both adapters??
I am using an Apple Cinema Display 30″ with an Nvidia RTX 3090 gfx cards. I have tried all Display Port connections, which by the way all work fine with my Samsung G7 monitor, and the Cinema Display has a perfect image on an older pc with proper DVI-D port, but I wanted to use the ACD as on my primary work station instead of the old machine. Latest studio gfx driver installed. 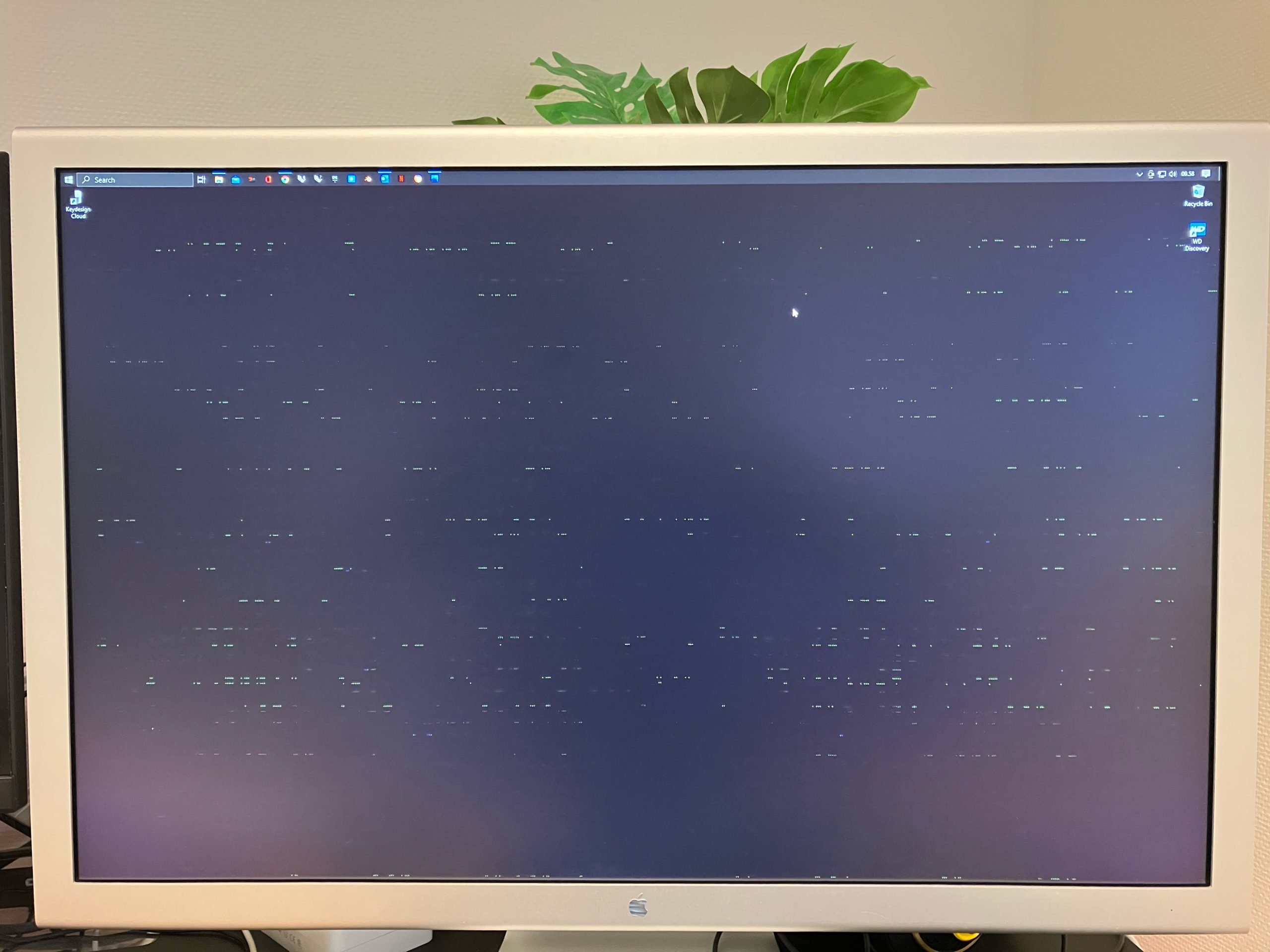 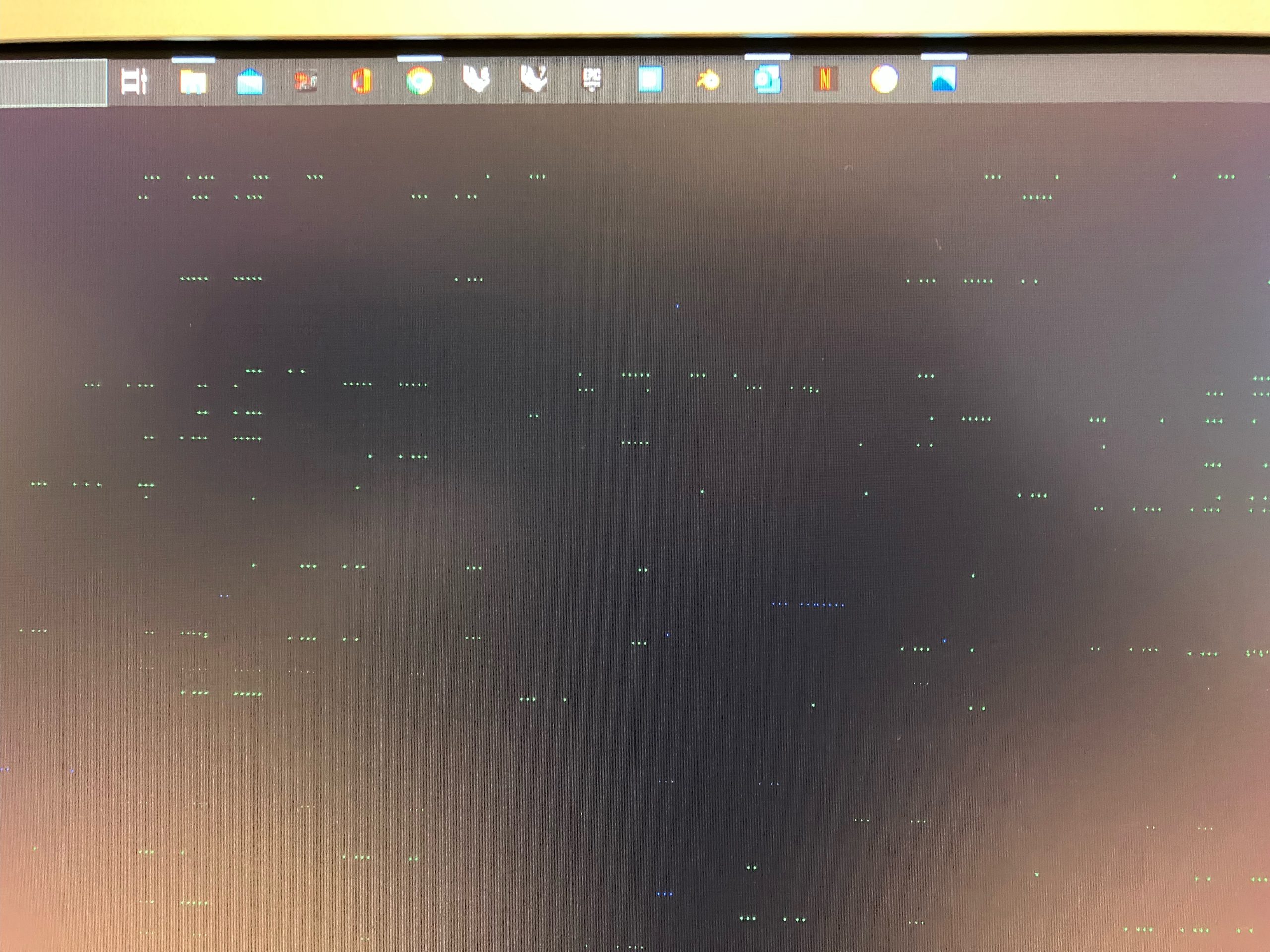 Thank you for your time 🙂

Sometimes this happens due to having to many USB devices connected to 1 USB controller on the motherboard, could you try and take out all but the USB from adapter and reboot?

From time to time this issue pops up and there is no fix or firmware update to solve it.

Thank you for your reply.
I am only using a mouse and a keyboard, but I have tried your suggestion, and there is no difference. If anything, I get a bit more of blue and red lines now, together with the green lines.

Do you think that the adapter is faulty/broken?

I doubt it is broken as it did exactly what your first adapter did. I don’t believe you can have 2 DOAs in a row.

Graphic Drivers are all up to date? Incl Windows drivers?

You mention Studio drivers, could you try DDU the drivers and install the normal end-user drivers?

Could you try a separate USB-A power source?

Hi Baak,
Its actually my fourth DOA adapter from Club-3D, as I also have the exact same issue with CAC-1510-A, where the first I got showed massive amounts of these flickering lines.
The second was better and shows no flickering until 15-20min after I have turned on the computer/display, and then the flickering stays there. Have tested it for a couple of weeks in a row, but I ended up selling my Nvidia RTX 2080 TI for which I used the cac-1510-a adapter so the issue never really got solved.

Anyway, I cant test with the newest game driver, as I’m working on a tight project right now, and the current Studio Driver is stable in my render software, so I can’t switch right now. Im an architect and 3d artist working with D5 Render, which relies solely on DX12 ray tracing, and there have been unstable releases from nvidia with this software in mind, so I’m not about to jeopardice it right now.

But I did the next best thing and tested the adapter with two other computers at the office, with updated drivers. Both, a lenovo laptop with a gtx 1060, and my secondary desktop computer with the same gtx 1060 showed the exact same flickering of mostly green lines. Tried all the Display Ports.
Don’t know if it is a general Nvidia issue, or if it is because all four adapters have been damaged during shipment. They looked fine when I got whem.
I did however noticed that there was no padding or foam or shock absorbant material in the Club-3D box, but also non the in bigger box that the adapter was shipped in. In fact the two adapters have been bought from two different companies, and non of them used any padding in their boxes. I asked one, if he could wrap the new replacement securely for me, before sending it, but he said that it was a robot who did all the packaging. Actually both companies use fully automated sorting.

If 4 out of 4 adapters show same signs, I’d start questioning other hardware.

Like I said in my first reply, this is an issue I’ve seen before and there is no fix for it.

I’m doubtful the adapters where damaged during shipping, Club 3D tries to be as environment friendly as possible, this is why there is no padding inside the product its box. But they would not ship products that could be damaged without the proper packaging.

I think you are right in your assumption about an incompability of some sort between my ACD and the two adapters. I have tested the ACD on a few systems with native DVI-D where it works flawlessly.
I would love to test the other cac 1510-a adapter with a Mac of some sort, but I unfortunately don’t know anybody who has a Mac with usb-c, and the company I work for is all Windows PC based.
Again, you are right. My 30″ ACD is the only DVI-D device that I have, so I cant test it with another Cinema Display.

I am sure that Club 3D sells their products in padded boxes during shipping to vendors, who would probably buy multiply units at the same time.

The problem arises when the vendor has to send an adapter to a web customer, such as myself, and they don’t add padding to their box that holds the Club-3D box with said adapter…. Yeah, the adapter would have to be a bit flimsy to take damage, and they all looked fine when I received them, so that theory is probably far fetched….

Well, if there is no fix or software update around this, then I’m throwing the towel, and reporting the cac-1010-a as faulty to the vendor, and get my money back.
And I will just have to use my sweet 30″ Cinema Display with an older gfx card with  DVI-D connection.

But thank you for your time and patience, and you have an awesome day 🙂

Time to ask office for a display upgrade! I’ve heard the new Studio Displays are nice 😉

You too have a great day!

Thank you very much. Looking into an original Apple mini display port to dual link dvi is a much better solution. I wasn’t aware that that product even existed 🙂