Since many of us are having issues with getting CAC-1070 and/or 1170 to work with our Intel Graphics setup, I felt it was necessary to break from the feedback thread and consolidate our efforts here.

I’ve entered a new thread in the Intel forums to bring the issue to the forefront and consolidate our efforts on their side as well. Please provide both Intel and Club 3D with feedback and so we can determine what exactly needs to be done to settle any outstanding issues: firmware, BIOS, drivers, EDID, etc..

This is also an effort to bring communication between Intel and Club 3D to the community so we can better assist both parties in a more efficient manner. Thanks.

Hi Onizuka, thank you for initiating this contact. Also on behalf of many users of (m)DP enabled Intel based notebooks, NUC’s etc. Our technical support team is gladly willing to work with Intel to see if there is a way to get 4K 60Hz working with their 3rd and 4th Generation Graphics.

I’m in the same boat as many others, so here’s my hardware combination:

Since buying the Monster HDMI cable, I now have the option in Windows 10 to select 4K resolution at 60Hz refresh rate, so the cable was obviously a bottleneck prior to this.  However when I select it and the TV tries to display it, the screen goes black for a few seconds and then reverts back to the previously selected resolution.  The highest it will go successfully is 4K at 30Hz.

I have now sent 2 emails asking for the firmware update, but Marcel seems reluctant to send it … I’m not sure why.  He has responded with the standard troubleshooting steps, which I have followed with no success.  One glaring issue with the standard troubleshooting as I see it, is the need to change the colour depth to 8 bit.  Unfortunately, Windows only supports 32 bit depth, which has been the case since Windows 8 … so as far as I can tell, I don’t have the ability to change the colour depth to 8 bit as suggested.

I would love a solution … anybody … Bueller?

Hi Jerry,
Sorry for the delay, email replied and firmware link send to your email …

Thanks I tried the firmware update but the app doesn’t work on Broadwell NUCs. So it seems I have no way to check or update the firmware at this point. Very disappointing I must say.

My guess is Intel is reluctant to join the conversation on this thread. Possible you guys throw your hat in their thread to officially cross-pollinate?

Please see here how I got it working: https://insights.club-3d.com/thread/how-i-got-4k-60hz-working-with-intel-graphics/

It worked, but guess what: HDMI audio gets corrupted when running at 60Hz. Everything sounds like fart (sounds like playing digital bits through analog speaker without a DAC). Can anybody verify if it’s an Intel problem or it’s the problem of CAC-1070?

It worked, but guess what: HDMI audio gets corrupted when running at 60Hz. Everything sounds like fart (sounds like playing digital bits through analog speaker without a DAC). Can anybody verify if it’s an Intel problem or it’s the problem of CAC-1070?From catbert

I have the same problem but I don’t know if that’s due to the adapter. In my case I cannot get the [email protected] going but I still get the digital fart from the speakers. To remedy this, if it’s music I listen to, I pause and play until it disappears. The distortion happens sometimes when I change audio sources, from TV to internal speakers to headphones and sometimes it appears spontaneously.

It’s annoying that Intel Graphics uses the old GTF timing standard by default instead of the newer CVT/CVT-RB standard. RoyalKing, maybe you can convince your Intel contact to make their software at least pick the timing standard based on the EDID from the display rather than requiring a custom resolution to use the newer standard.

Glad to hear you got it working too! Also, good to know about the x265 videos. I’ve been doing a lot of 4k screen capture recently using Bandicam and that uses my discreet Nvidia GPU, albeit I am creating 4k x264 MP4 files. I can use the Intel QuickSync too but my tests found the NVidia to be far more suitable for that kind of workload.

I have also tried the a other computer with nvidia 960 gtx with hdmi 2.0 at 4k @ 60hz and it worked flawless. i use the same cable and everything to the tv.

I would like to chime in on my labours with the adapter and setup.

Adapter:
CAC-1170
Rev: A2-00
Fw: V7.23
1615
TV: Philips 49PUS6501/12
Laptop: Lenovo L440 single GPU Intel HD4600
OS: Arch Linux 4.7.4-1-ARCH
The GPU is more than capable of pushing [email protected] I had a 43″ Philips BDM4350C and it worked flawlessly through the DisplayPort.
For the present TV, out-of-the-box I would get only [email protected] but for some reason overhead is added as if post processing is being activated. The mouse feels sluggish and you can feel a lag even for key presses. A reaction test between different resolutions revealed a difference of ~120ms between [email protected] and [email protected]:
Average of 5 tries:
1080p60Hz: 268ms
1080p30Hz: 324ms
2160p30Hz: 447ms
I checked and double checked the settings in the TV to make sure they all are off and the TV is in PC mode. (Game in Philips’ case)
I don’t know how many people use Linux around these parts but in my case my search results for a similar setup led me to this post
So i tried to play with the modelines for both the CVT and GTF timings.
These were my modelines:

Of interest were the CVT-60Hz and GTF-60Hz. I would get a black screen and one line visible at the top. I could see the cursor moving in the form of a dot, but nothing else happened, not even fallback to 1080p
Here’s the dmesg.
Here’s the Xorg log.
I already sent an email to Club3d support explaining my situation but not as thoroughly as this post.
Any help would be greatly appreciated. The main reason for having this purchase was to double down as a computer monitor. If any more information is necessary let me know.

Which CPU you have inside ?

Please do this:
Uninstall current graphics driver software.
Manually downloaded and installed (don’t let that auto-updater from Intel do that) Intel Graphics Driver pack 15.40.25.4463, which contains Display Audio Driver 6.16.00.3197 plus Graphics driver 20.19.15.4463. Open Intel Graphics Control Panel, Chose “Custom Resolutions” (left bottom option) It will asks you if you wish to continue; YES
Standard the “Basic” setting is shown, click on “Advanced” , Fill in; Width 3840 ; Height 2160 ; Refresh Rate 60 ; Timing Standard CVT-RB ; and click on “ADD” on the right bottom of the window.
Now this resolution I added to the system and can be chosen. Go back to “General Settings”(left top) , it will show the basic options and here you can now choose the 3840×2160 resolution and 60Hz. 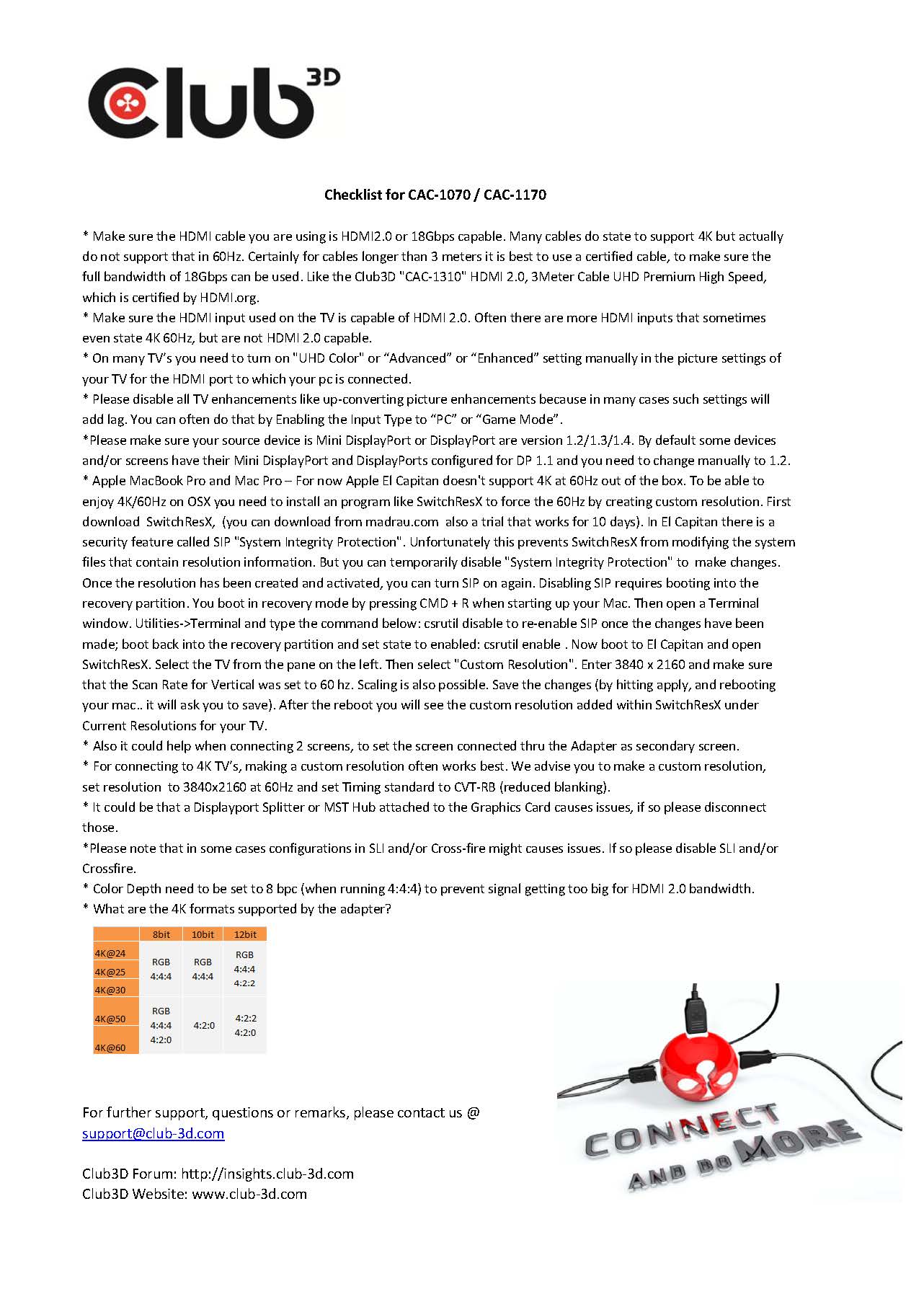 Unfortunately in my case I run a Linux distribution (Arch Linux) and those drivers apply only to Windows/MacOS. If you happen to have any tips for the Linux platform I’m more than happy to try them out.

Yes the CAC-1170 is the simpler solution but the CAC-1070 is more future proof due to my intent to switch to a dedicated GPU down the road + might as well put the DP-to-miniDP adapter to good use.

Thank you for your help

after a year of neglect, I decided to revisit the issue. As per this article, it seemed that the problem was with the default parameters of my desktop environment (ie GNOME) After removing the monitors.xml file and adding the custom resolutions to the xorg config file I have a working [email protected] session albeit running on X11 instead of Wayland. The issues with input lag (ie mouse reaction time) have been resolved.

Good to hear happy you got it going 🙂
And thanks for the feedback.