I got an R9 290 royalAce yesterday and after installing it I get the following strange screen on startup: 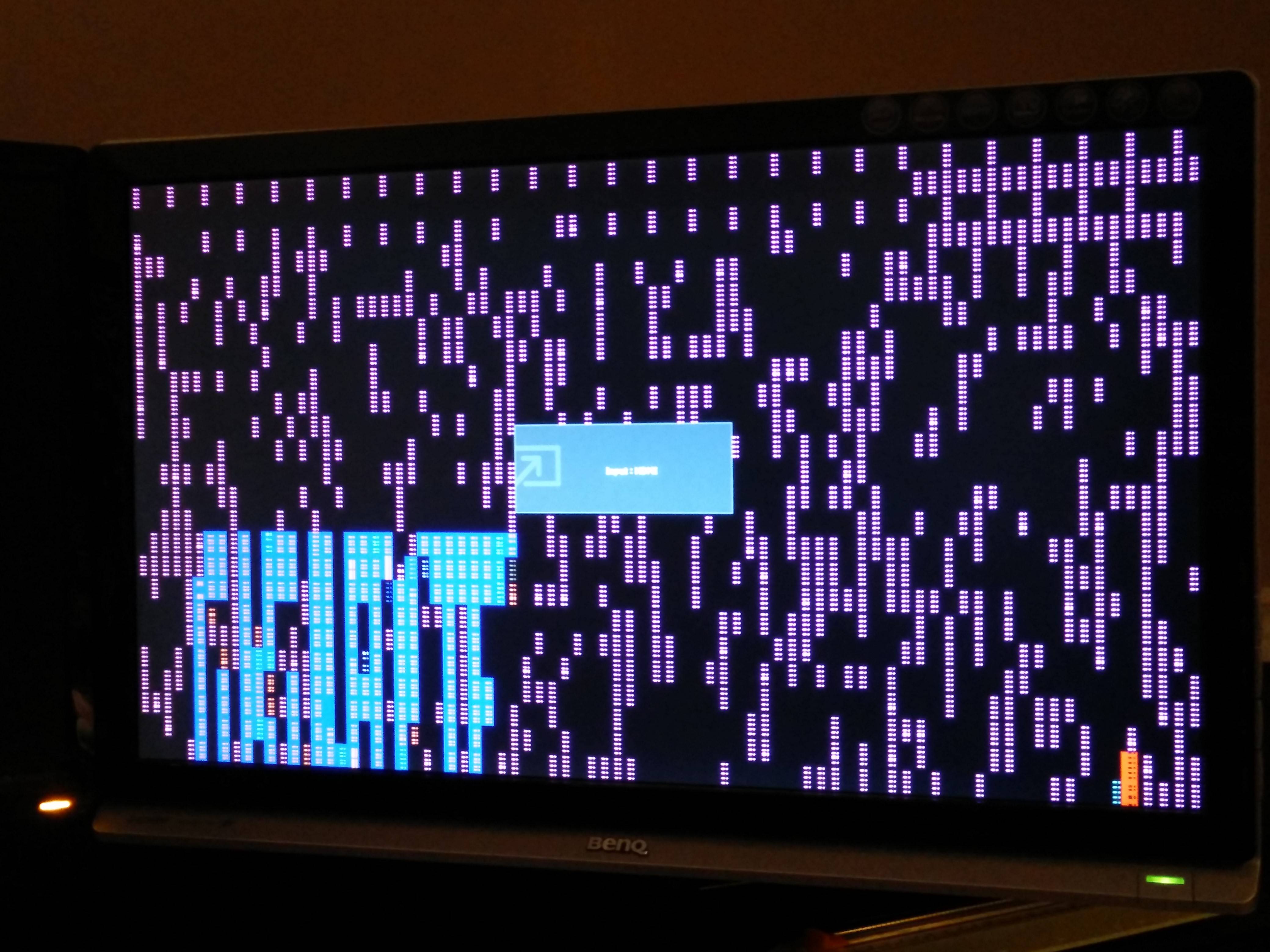 This happens before the BIOS post and is very short duration. It doesn’t hang or hinder startup speed at all from what I can tell, but I never had this issue before. Computer continues startup normally after (post, windows, desktop). I’ve not played much for games on it yet, but I did do a furmark test to see if it was going to crash after having the issue and the temps topped out at 70 degrees with no instability. I am also not seeing any strange PC behaviour yet outside of this screen, which does not appear to be random and looks the same every time.

I am running 3 monitors presently but have also tried with a single monitor attached and still had the issue. I’ve tried DVI, HDMI and displayport (using an active DVI to DP adapter that I’ve always used with my old card)

I have recently reformatted and have not overclocked my system at all.

is there an issue with the card? My first thought aside from a card issue was a PSU issue, but I am not having any erratic behaviour and do not have any system instability even under load tests, as well I know these cards (and 290X) have been run on the exact same PSU without issue.

I am going to do BIOS and chipset driver reinstalls tonight to see if that solves the issue, but wanted to get this up now in case this has been seen before (I’ve not seen a screen look like this before and can’t find the same from googling).

I did also remove the AMD drivers/catalyst control center entirely and reinstall using the latest drivers.

I will update this post later tonight after having done driver updates with whether or not the screen issue is gone, but I appreciate any input on other things I can look into.

Hi,
Have you tested your memory modules? Try one by one booting into the OS to see if this could be a memory issue.

Thanks for the quick response.

This didn’t start happening until immediately after putting the new card in. I was previously using a 6850 and had no issues. I can perform this test later tonight when I get home if it must be done, but the rest of the PC aside from the video card is not new and have shown no issues up until installing the 290 last night.

I can confirm that it is not memory related as swapping them around did not solve the issue. As well, swapping back to my old card did not have the problem so I tried re-seating the 290 again and am still getting the same screen. The Gigabyte TouchBIOS screen is what is supposed to be displayed, looks similar to this:

This screenshot is not of my setup, found it on google images since I have the 290 in again and can’t see the display. This is where I’d press delete to enter the BIOS configuration. Once this screen is done, the text screen that displays my drives shows up fine before loading me into windows.

Do you have UEFI enabled in the BIOS? Check if you can reset the BIOS to verify if the problem persist.
I saw this on the Gigabyte BIOS version U1L(UEFI BIOS)

(Note) Some GIGABYTE utilities are not supported under UEFI BIOS architecture. Please remove Smart6, Dynamic Energy Saver, Smart TPM, and Touch BIOS utilities before updating the BIOS.
Did you update your mainboard to the latest version and installed it following this instructions?
The 6850 is not UEFI ready but the 290 it is.
Is it possible you can test the 290 in a different system to verify results?

I am actually not using the UEFI version currently and am still on an older BIOS version since the UEFI was marked as beta. I can give the UEFI a try tonight after work to see if it helps.

I also do not currently have any of those utilities installed (never found them to be particularly useful).

I will try the UEFI tonight and get a screenshot of what it looks like then.

I’ve been unable to flash to the UEFI using the files provided on the gigabyte support site. Q-Flash always says Bios checksum error. I did however update my BIOS to F12 (the most recent non-UEFI) and did not help the issue at all.

I did however find the Microsoft approach to the issue – I turned of “Show fullscreen logo” in the BIOS settings to remove the image and stick with a text based format. There is no longer any strange graphical glitches on boot. This doesn’t necessarily solve the problem, but I’m not convinced it is actually a problem since I’m not having other issues.

I did see a video where someone flashed the UEFI version using a DOS bootable USB, but as far as the Gigabyte support site reads they want you to explicitly use Q-Flash. I don’t want to cause further issues so I opted to go with the most recent Q-Flashable version instead. Is this something I should try anyway? I would assume it could be ruled out to be a BIOS compatibility issue now as I was on F9, the user with the same issue as me was on F10 and I’m now on F12 and still saw the issue.

I just did a full 3DMark test run. My PC scored right where it should be (there is an official reference PC nearly identical to mine and they had nearly identical scores). I didn’t see any artifacting or anything unusual.

I am at a loss for anything else to look into, I think it is reasonable for me to deem that there is no problems currently and just be happy with my card, unless there is something I may have missed.

Hi,
Please contact Gigabyte if they can provide you a new BIOS update or a solution. The BIOS is a bit old and I am quite sure they should have a BETA or another release that is not posted on the web.

Hi , i be the same problem, anybody fixed?

P.D i update bios motherboard and nothing change 🙁